“Hard to get in without perfect Swedish”

Assaf Assaf speaks three languages, has studied both HR and sustainability and has previously worked in Sweden, Syria and Thailand. Despite this extraordinary skillset, he has found it hard to gain a foothold in the Swedish labor market. Through the Jobbsprånget program, he is now completing an internship at Direct Link, where he is highly appreciated.

Assaf Assaf was working at a communication company and studying HR issues in Syria when the war broke out. On arriving in Sweden in 2015, he began studying Swedish and soon completed an internship in Sandvik’s HR department. Since then, Assaf has studied Sustainable Supply Chain Management at the School of Engineering in Jönköping, and has completed an internship in Thailand, which involved observing workplaces in a factory.

“I have my degree, but it’s hard to assimilate into society if you don’t speak perfect Swedish. PostNord is a large company that works with sustainability and supply chain management. It’s a perfect match for me!” says Assaf.

Via the Jobbsprånget program, trilingual Assaf was matched with Direct Link, which works with customers outside the Nordic region − in Europe, Asia and the United States.

Maria Karlsson, Head of Commercial at Direct Link, has nothing but praise for Assaf and the Jobbsprånget program.

“Assaf is something of a sustainability specialist, so we have him working on sustainability issues here at Direct Link. However, we were more interested in his personal qualities than his official skills,” she says, before praising Assaf to the skies: “Fast! Smart! Delivers value for the company! Extremely warm and empathetic! Makes a huge contribution to the group and our work!”

The assignment Assaf has been working on so far involves writing Direct Link’s Supplier Code of Conduct. He has also prepared a framework for how Direct Link is to work with sustainability in the future by setting goals in the field of sustainability and identifying suitable initiatives for Direct Link.

As regards Assaf’s language skills, Maria has not found it to be an issue. Everyone speaks Swedish during coffee breaks, which not only gives him the chance to practice his Swedish skills, but also helps him get to know his colleagues a little better and to find out more about Swedish society in general. English is the principal language used during work, but Swedish is spoken at many meetings and used in emails, and Assaf uses the context to follow the gist of the conversation. 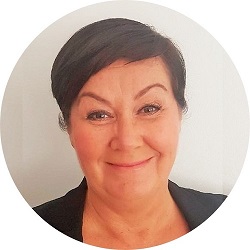