Cows and pigs in the fuel tank. No, really!

A volvo  FH500 is a big, thirsty truck. Sten Blicher sometimes has to fill up his 690-liter tank with diesel twice a week. He distributes parcels from the big parcel terminal in Køge to distribution hubs, depots, post offices, and Collect Shops across the island of Zealand in Denmark.

But since September 2020, he hasn’t been refueling with regular, oil-based diesel. He’s been filling his tank with pigs (!).

No, just joking. It’s not only pigs. It’s cows as well. It may sound revolting, but it’s actually true.

We’re talking about a new kind of biodiesel that helps cut carbon emissions by almost 90 percent. It’s made from slaughterhouse waste. Basically, it comes from the unusable remains of dead animals, such as cows and pigs.

“I drive up to 400 kilometers every day, and I haven’t noticed any difference in engine power. The Volvo FH500 is our largest truck. I love it – and it runs well on green diesel. 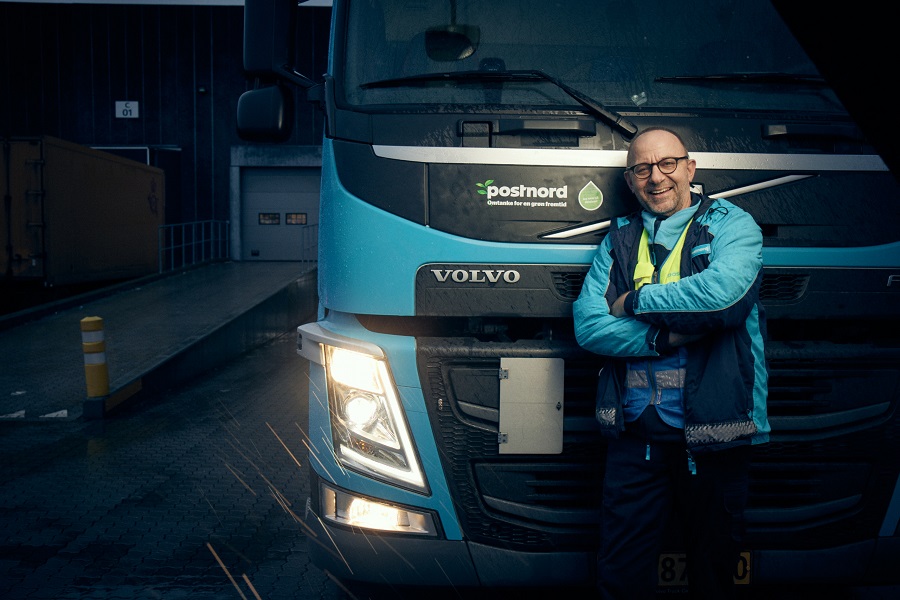 “I’m quite proud to work at a place like PostNord where green initiatives are a priority,” Sten says. “I don’t think about it every day but it’s clear that we’ve all got to think about what we can do for the climate and the environment in general. When I’m driving my truck, I get to see amazing views of fields and countryside. You don’t have to be an expert to notice that biodiversity is under threat.”

There aren’t as many wild flowers in fields or on the verges as there used to be?

“That’s it. But my wife has let me dig up 400 square meters of our lawn to make a biodiverse Nordic wildflower meadow. It took a bit of persuading, I might add. We’re looking forward to a garden with a difference this spring.”

Getting out into the countryside is something Sten has always enjoyed. The wilder and more untouched, the better. He’s been going hunting in the forests of Central Zealand since he was “a big boy”. When it’s hunting season, he might head out three times a week with Agger. Not the former star of the Danish national football team, Daniel Agger, but Sten’s rough-haired gun dog.

“As a Liverpool defender, Daniel Agger was compared to a tough dog that never gave up until he’d caught and brought down his opponent. Just like when Agger retrieves game in a hunt.”

Sten loves hunting. “It’s the perfect thing when you’ve spent the whole day behind the wheel. It’s a great reason to get you out in the woods. If we bring something home for dinner, that’s a bonus. In the autumn, we mostly hunt pheasants and hares.”

Sten and his wife Liselotte often eat game at home several times a week. As Sten explains, they have “a big freezer and some hungry friends”.

So what do you do with the remains of the hares and pheasants that you can’t eat?

“I thought you might ask me that. At the moment, I think we just throw them away. But who knows, maybe one day, pheasants and hares will be helping to deliver the mail too.”

In 2020 PostNord Denmark started using a new type of diesel, which isn’t made from oil but from waste products from slaughtered animals. In 2020 alone, the move has seen PostNord cutting carbon emissions by close to an additional 3,000 tonnes.

“That’s quite a lot. It’s roughly equivalent to the amount of carbon a truck would emit if it drove round the earth at the equator 73 times,” says Mathias Fogh Bang, transport consultant and data analyst at PostNord in Brøndby.

Mathias’ job is to calculate how much various new initiatives will reduce PostNord’s carbon emissions.

The fat from dead animals contains the energy to produce climate-neutral diesel. It’s known as second-generation biodiesel because it’s made from an existing waste product.

Since September 2020, 118 of PostNord’s large trucks in Denmark have run on Q8’s green HVO100 diesel. But this is by no means the first time that PostNord has cut its carbon emissions. PostNord Denmark has reduced carbon emissions by no less than 67 percent since 2009.

Jan Greve is Head of Development at PostNord in Brøndby and part of the team that’s constantly looking for new ways to be more climate-friendly.

“We’re always trying to do whatever is most efficient. Technology, and the opportunities it offers, are constantly changing, so we can’t guarantee we’ll be running on biodiesel in five years’ time. But right now, it’s a good way of cutting our carbon emissions. And it means we don’t have to invest in new trucks either, just switch from black diesel to green. In purely chemical terms, there isn’t much difference,” Jan says and continues:

“PostNord’s customers want us to be as green as possible. That’s what we’re aiming for, and in turn we make the same demands of all our contractors. It’s set off a positive chain reaction.”

But PostNord has some tough targets to meet too. The Danish government has decided that Denmark is to reduce its total carbon emissions by 70 percent by 2030.

“And at PostNord, we’re aiming to be totally fossil-free by 2030. I find it hugely satisfying to play a part in achieving that goal.”

More about Issue 1 - 2021
Parcels on track!
“We change the entire company structure”
Four shades of blue
”It feels modern and innovative”