Postage stamps are a reflection of modern Sweden, where the importance of diversity is self-evident. PostNord will therefore be issuing a Pride Flag stamp on May 4th, designed by artist Lisa Rydell. 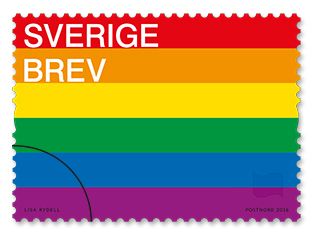 ”By issuing a stamp with the Pride Flag, we want to emphasise the equal value of all people and the strength represented by people’s unique qualities and differences. To the best of our knowledge, this is the first time the Pride Flag has been reproduced on a stamp – which makes it particularly gratifying that people will now be able to send affectionate greetings with the Pride Flag stamp to all corners of the world,” says Per Ljungberg, Head of Communications at PostNord Sweden.

PostNord’s Stamp Advisory Committee receives hundreds of suggestions for stamp motifs every year. The idea for the Pride stamp came from Lisa Rydell, who was also commissioned to design the stamp. Ms Rydell is an artist whose experience includes designing books and exhibition posters. She came up with the idea for the Pride Flag stamp when taking a long walk in the summer of 2014.

”Swedes really like to send and receive stamped letters and postcards. For many people, the choice of stamp is an extension of their written message – which will be made especially profound with the new Pride stamp. This motif is also well in line with PostNord’s internal diversity initiatives,” says Mr Ljungberg.


About the Pride Flag
The Pride Flag was officially launched during San Francisco Pride 1978 and quickly became extremely popular. The flag, created by artist and activist Gilbert Baker, originally had eight colours. The pink colour was removed from the flag due to fabric unavailability and the turquoise stripe was dropped to produce an even number of colours. Since 1979, the stripes of the six-colour flag represent diversity and always appear in the same order: red, orange, yellow, green, blue and violet. Each colour carries its own significance, with red symbolising life, orange symbolising healing, yellow symbolising the sun, green symbolising nature, blue symbolising art and violet symbolising spirituality.